Jesus was a jazz songwriter… 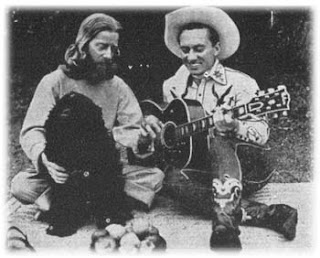 Though born in Brooklyn, New York to a Jewish father and a Scottish-Englishmother, he was adopted in 1917 by a family in Chanute, Kansas and raised under the name George McGrew.
During the 1930s, McGrew lived in Kansas City, where he performed as a pianist and dance band leader.  He probably also lived in New York City for some time, although little is known of that period of his life. In 1941, he arrived in Los Angeles and began playing piano in the Eutropheon, a small health food store and raw food restaurant on Laurel Canyon Boulevard. The cafe was owned by John and Vera Richter, German immigrants who followed a Naturmensch and Lebensreform philosophy influenced by the Wandervogel movement in Germany. Their followers, known as "Nature Boys" and who included Robert "Gypsy Boots" Bootzin, wore long hair and beards and ate only raw fruits and vegetables. During this period, he adopted the name "eden ahbez," choosing to spell his name with lower-case letters, claiming that only the words God and Infinity were worthy of capitalization. He is also said to have desired the A and Z (alpha and omega), the beginning and the end, in his surname. During this period, he married Anna Jacobsen and had a son.

In 1947, at the prompting of radio host Cowboy Jack Patton (inside pic), ahbez approached Nat "King" Cole's manager backstage at the Lincoln Theatre in Los Angeles and handed him the music for his song, "Nature Boy". Cole began playing the song for live audiences to much acclaim, but needed to track down its author before releasing his recording of it. Ahbez was discovered living under the Hollywood Sign and became the focus of a media frenzy when Cole's version of "Nature Boy" shot to #1 on the Billboard charts and remained there for eight consecutive weeks during the summer of 1948. Ahbez was covered simultaneously in Life, Time and Newsweek magazines. Frank Sinatra and Sarah Vaughan later released versions of the song. ahbez also faced legal action from Yiddish musical composer, Herman Yablokoff, who claimed that the melody to "Nature Boy" came from one of his songs, "Shvayg mayn harts" ("Be Still My Heart"). Ahbez claimed to have “heard the tune in the mist of the California mountains,” but legal proceedings resulted in a substantial monetary settlement for Yablokoff.[citation needed]

Ahbez continued to supply Cole with songs, including "Land of Love (Come My Love and Live with Me)", which was also covered by Doris Day and the Ink Spots. He also worked closely with jazz musician Herb Jeffries, and, in 1954, the pair collaborated on an album, The Singing Prophet, which included the only recording of ahbez's four-part "Nature Boy Suite." The album was later reissued as Echoes of Eternity on Jeffries' United National label. In the mid 1950s, he wrote songs for Eartha Kitt, Frankie Laine, and others, as well as writing some rock-and-roll novelty songs. In 1957, his song, "Lonely Island," was recorded by Sam Cooke, becoming the second and final ahbez composition to hit the Top 40.

In 1959, he began recording instrumental music, which combined his signature somber tones with exotic arrangements and (according to the record sleeve) "primitive rhythms". He often performed bongo, flute, and poetry gigs at beat coffeehouses in the Los Angeles area. In 1960, he recorded his only solo LP, Eden’s Island, for Del-Fi Records. This mixed beatnik poetry with exotica arrangements. During the 1960s, he released only three singles. Grace Slick's band, The Great Society, recorded a version of "Nature Boy" and ahbez was photographed in the studio in early 1967 with Brian Wilson during a session for the Smile album. Later that year, singer Donovan came across him at Joshua Tree in California, down for a reportedly "near-telepathic" conversation. From the late 1980s until his death, he worked closely with Joe Romersa, an engineer/drummer in Los Angeles. The master tapes, photos, and final works of eden ahbez are in Romersa's possession. He died on March 4, 1995, of injuries sustained in a car accident at the age of 86. Another album, Echoes from Nature Boy, was released posthumously. He is survived by his son.
"Nature Boy", which became a #1 hit for eight weeks in 1948 for Nat King Cole, and has since become a pop and jazz standard.

Living a bucolic life from at least the 1940s, he traveled in sandals and wore shoulder-length hair and beard, and white robes. He camped out below the first L in the Hollywood Sign above Los Angeles, studied Oriental mysticism, and claimed to live on three dollars a week, sleeping outdoors with his family, and eating vegetables, fruits, and nuts.